Kaguya-sama Wants to Be Confessed To: The Geniuses' War of Love and Brains

Read the manga › Where to start after the anime ›Tachiyomi plugin

All’s fair when love is war!

Kaguya Shinomiya and Miyuki Shirogane are the geniuses leading their prestigious academy’s student council, and inevitably they fell for each other. But they both are too prideful to be the first to confess, as that would be a loss in the competition of love! In the end, who will confess their love first?

I like to call this the Death Note of school romantic comedies. If Death Note ever made you laugh out loud (on purpose).

We Want to Talk About Kaguya Spin-off

A comedic tale of two delusional girls who have absolutely no idea what goes on in the Student Council room! This manga provides context to a lot of stuff happening behind the scenes of the main story in Shuchiin.

A light novel side story about the paranormal Legend of the Seven Mysteries of Shuchiin that the Student Council suddenly gets drawn into.

A story about the harsh realities of idol life and the dark undercurrents of the entertainment industry. The manga is drawn by Mengo Yokoyari and story is by Akasaka Aka, the author of Kaguya-sama.

This is the best place to read Kaguya online.

And here are the reasons why.

We don't have any ads - Guya.moe is made by the fans, for the fans. We don't seek profit, we just love Kaguya.

This site runs Cubari: our fast, modern, and configurable manga reader, developed for Kaguya with features you haven't seen anywhere else.

We indexed the whole series, word for word. Open any manga chapter and press Ctrl+F to search for any text within the entire manga.

We pick the best English chapter scanlation available and only host translations that make sense.

Is this the official site for Kaguya-sama?

No, this entire site is fan-made, and we only host fan-made translations. The official printed release is done by Viz Media. There are no official translations for We Want to Talk About Kaguya, the official doujin, and Oshi no Ko.

Why did you make this?

At some point, the team that originally scanlated Kaguya (Jaimini's Box) removed their chapters from Mangadex and only hosted them on their own website. However, their website did not have the earlier chapters, meaning the series was incomplete there. Meanwhile, the other releases posted on Mangadex at the time were of a much lower quality than the Jaimini's Box versions.

Therefore, we consolidated Kaguya-sama and its spinoffs under this website and made a useful reader, as well as some innovations like full-text search. We like the Kaguya-sama manga a lot and want more people to discover and enjoy Kaguya-sama in the best way possible. 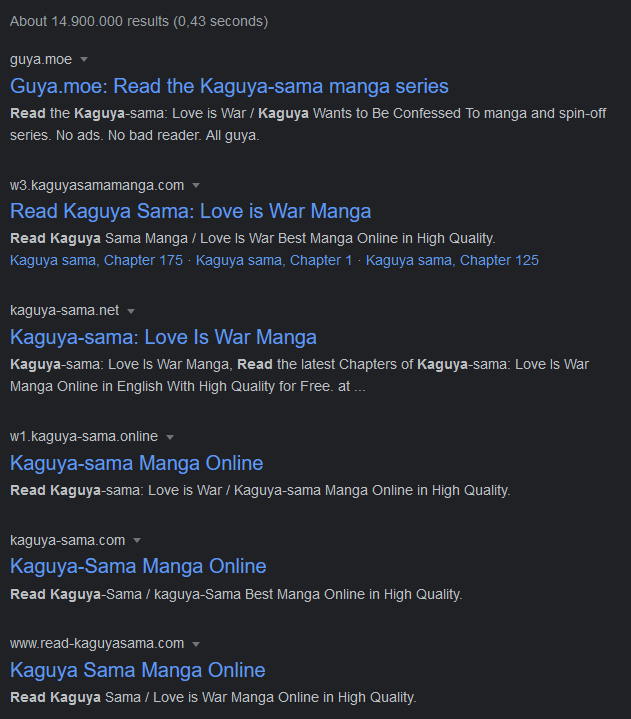 First, the Viz manga volumes have yet to catch up to the weekly release. There is also no simultaneous release for Kaguya on MangaPlus.

Second, by making the site as perfect as possible we direct a lot of traffic away from other "read Kaguya" websites that earn money with shady ads by taking fan releases and hosting them with no regard for quality or the fans - their only aim is views and ad revenue.

Third, despite providing all the chapters for free, we still want to promote the official sources so readers can support the author and official translators. We believe that both official and non-official releases can coexist - by keeping readers actively interested with regular weekly fan translations, we think more readers will buy official volumes and help support the series.